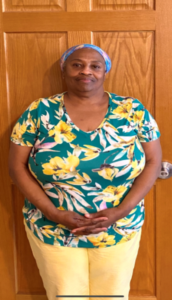 Meet Donna Jones, our Mest Manor world traveler. Donna was born, and raised here in      Savanna, IL. She is the middle child of her family, as she has an older brother (deceased), and a younger sister.

During high school, she worked at the Savanna Army Depot Civilian Personnel Office. It was there, that she met her future husband. As he was military and was stationed every few years at different Army military bases, she had the opportunity to travel to, and live in a few different states, as well as, overseas. It began with a move to South Carolina, then off to Germany, to Texas, back to Germany, and lastly North Carolina.

After military life, Donna moved to Virginia for a few years. In 2013, Donna headed back to Savanna to be near her mother. We are extremely happy and fortunate, that upon her return, Donna chose Mest Manor as her new home.

Donna is an extremely proud mother of three children (two sons, and one daughter), and twelve grandchildren. She especially enjoys making Easter baskets, and baking cookies at the holidays for all of her grandchildren. It brings her the utmost joy!

Donna’s other hobbies include riding her bike, dancing, shopping, watching old movies/TV programs (Perry Mason, Leave It To Beaver, westerns, etc.), sending special occasion cards to family and friends, word search puzzles, and traveling. She has vacationed in the Bahamas, Jamaica, and even taken a Exotic Southern Caribbean cruise that included Grand Turk,
La Romana, Curacao, and Aruba. In addition, she traveled to Las Vegas to celebrate her 65th birthday! Donna’ s ultimate goal in life is to put a smile on the face of each and every person she meets.

NOTE: Savannah Jones, Donna’s mother, was a Mest Manor resident for twenty-one (21) years, prior to her move to Allure of Mt. Carroll in August 2016. Last November, Savannah celebrated her 100th birthday.