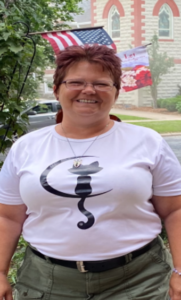 Meet Kim Gouty, one of our Carroll Apartments residents who had an extraordinary childhood.  Kim was born in Maryland, however, due to her father being in the Army branch of the U.S. military, her family moved to Germany in Central Europe when she was a child.  Following three years in Germany, her family moved to Texas, then to Belgium in Western Europe, and finally to the Savanna Army Depot here in Savanna, IL.

Kim attended 6th, 7th, and 8th grade at an International School in Belgium. For her yearly class trips respectively, she traveled with her fellow classmates to London, England (via the English Channel), Belgium Sports Center in Brussels, and Switzerland.  Also, in addition to Kim’s native English language, while attending the International School, Kim learned five (5) additional languages including; Dutch (Holland), Flemish (Belgium), French, German, and Spanish.

While living in Belgium, Kim had the opportunity to ride horses in the Belgium rodeos, take clown classes, and starred as Lucy in the musical play “The Lion, the Witch, and the Wardrobe.”

A few additional highlights of her childhood include; attending the Dutch Flower Parade, which is the most famous and unique flower parade in the world, toured the Keukenhof Tulip Gardens in Holland, as well as, visiting the Edam Cheese Market in Edam, Netherlands.

The best thing of living overseas for Kim was the delicious food, including Edam cheese.  Her absolute favorite meal was Rouladen served with Spaetzle.  Rouladen is a German meat dish, usually consisting of bacon, onions, mustard and pickles wrapped in thinly sliced beef which is then cooked.  The Spaetzle is micro dumplings.  Luckily for Kim, while living overseas her mother became a master at making her favorite Rouladen dish homemade.

Kim has resided at Carroll Apartments since April 2007.   She raised her  two sons, Michael and Anthony, here in Savanna, IL.  In addition, she has one grandson, Alexander, that keeps her busy as she helps take care of him while her son is working.