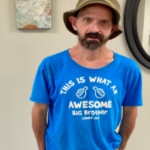 Meet Eddy Hearne, one of our Carroll Apartments residents who is a Savanna native, and the “Awesome Big Brother” (as you can see on his shirt) to his two younger sisters.

One of Eddy’s proudest achievements is his employment with the Rolling Hills Progress Center in Lanark, IL for the past twenty-three (23) years.  Eddy was recently recognized as 2019 Plant #1 Worker of Year.  Staff honored Eddy for his willingness to help anyone at any time, and for often thinking of others before himself.  He has a great attendance record, is active in Special Olympics, and works many jobs throughout Plant #1.  Congratulations Eddy!

Eddy enjoys participating in a variety of community field trips that the Rolling Hills staff plans and coordinates throughout the year.  Some of the trips that he has most enjoyed include; a Basketball Tournament, Track Meet, and the Symphony of Lights in Clinton, IA each December to celebrate the holiday season.  Currently, he is practicing for an upcoming Bowling Tournament.