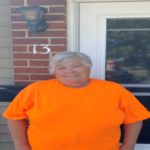 Meet Vicki Zink, one of our Maple Lane residents who is a Thomson, IL native.  She is the oldest sibling in her family, and has two brothers, and two sisters. The most fun and memorable times of her childhood were her family’s yearly trips to Colorado at Thanksgiving time, in which, they stayed at the home of her father’s long-time friend and his family during the holiday.  It was a yearly trip that her entire family looked forward to.

Vicki is the proud mother of three children (2 daughters, and one son), five grandchildren, and four great-grandchildren.  She is honored that her youngest great-granddaughter is named, Shelby Jean, after her.

Prior to Vicki’s move to Maple Lane, she resided in Sycamore, IL.  She was employed at the DeKalb County Rehabilitation Center for seventeen years.  She began her career at the rehab center as a cook, however, she was soon promoted to the Dietary Department Supervisor, a position she respectively held for 15 years.

This past August, Vicki was overjoyed to check off an item that has been on her bucket list for many years.  Vicki, along with one of her daughter’s, took her dream trip to Connecticut to walk on the beach, and put her feet into the Atlantic Ocean.  What an absolute thrill is was for her.  Another highlight of the trip was a three hour roundtrip triple-decker ferry ride to Long Island which featured stunning scenery.

Vicki’s hobbies include reading Danielle Steele novels and books of the Amish, creating Diamond Art, as well as, her all-time favorite hobby of sewing.  In fact, Vicki began sewing in Home Economics class in high school and enjoyed it so much that, with the help of her grandmother, she actually made her own high school Homecoming and Prom dresses.  How amazing is that!!  Now days, Vicki continues to enjoy sewing quilts for her grandchildren, corn hole bean bags, and lots of miscellaneous items that she gives as Christmas gifts to family and friends.